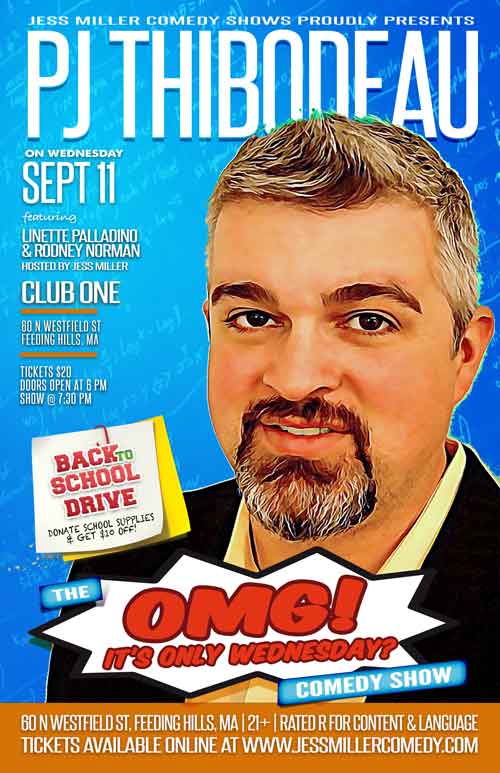 Laugh along with Comedian PJ Thibodeau as he Headlines The “OMG! It’s Only Wednesday?” Comedy Show on Wednesday, September 11, 2019 at CLUB ONE in Feeding Hilss, Mass. Featuring Linette Paladino and Rodney Norman. Hosted by Jess Miller.

Give Back & Laugh At The Same Time!

This month’s show gives back to a random group of teachers who have been nominated to win a basket of supplies for their amazing work throughout the year!  To get a discount for donating to our Back 2 School Supplies, bring in any of the following supplies and receive $10 off General Admission.

Use Promo Code TEACHERSROCK to get your discount, then bring your ticket stub and donation to the show.  We will check you in and get you seated for a super fun night out!

How To Get Your Discount:

To use the discount, order tickets online using the promo code. After you’ve made your purchase, bring your donation to the show. Check in at will call with your donation (must have at least one new item per ticket to receive the discount). Items will be donated to a special teacher(s) in Western Mass. For your convenience, we have included a list of supplies below).

How/When Do Teachers Get Their Supplies:

You can nominate your favorite teacher to win a basket of supplies.  All supplies will be divided between 12 baskets and given out during our Twelve Days of Christmas Toy Drive for Foster Kids in Western Mass! 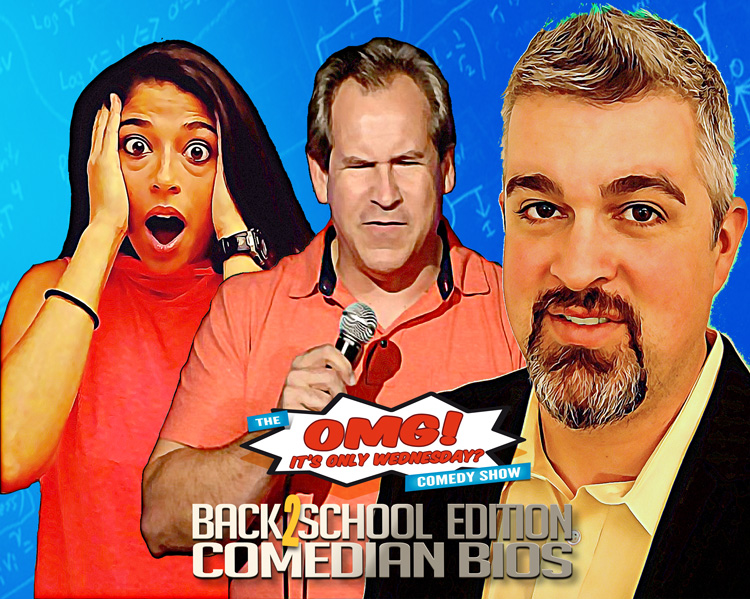 This Providence, Rhode Island resident has been referred to as one of the most underrated acts working the national stand-up comedy circuit. That is, of course, when he’s not spending time with his family: his 4 year old daughter, Talia, his 3 year old son, Jordan and his [unspecified age] wife, Jennifer. PJ has performed at over 150 colleges across the country on his way to becoming one of the youngest club headliners in the Northeast. He has performed at some of the best comedy venues in the country including: The Mohegan Sun Resort and Casino; Foxwood’s Resort and Casino; Caroline’s Comedy Club in NYC; The Comedy Connection in Boston; The Comic Strip in NYC; The Laugh Factory in Los Angeles and many more. A Rhode Island native and the 2003 RI Comedy Festival Male Stand Up Comedian winner, he has developed a loyal following – receiving great praise. The Boston Globe says, “PJ wins the crowd over quickly and easily.” With a mix of styles and a variety of topics, PJ Thibodeau has been entertaining all ages and types of people and is a favorite in the college market! Narrative in nature and full of emotion, the audience gets an entertaining look at life from a simple man’s point of view. After opening for some of the biggest names in comedy such as Dane Cook, Dave Chappelle, Jim Breuer, Dom Irrera, Brian Regan and Jay Mohr, he, himself, has become a headliner – working clubs and colleges across the country.

A Stand-Up Comedian, Army Veteran and young Mom, Linette Palladino manages to hit the stage at night, fulfill her military duties and care for her baby daughter.  After her full military service, Linette used her skills doing special assignments during the day and stand-up comedy at night. In between all that, she got married and had a baby.

Rodney has been delighting audiences for 20 years. With his unique and always surprising presence he takes the audience on a comedy adventure from the beginning of time to what he had for lunch last Tuesday. This former Marine with a BS degree in Philosophy has a way of tickling the fancy of anyone who is lucky enough to be in his audience. Always clean, clever and funny for any audience. Winner Audience Choice Award 2018 Clean Comedy Challenge, Featured at the Boston Comedy Festival

Jess Miller, creator of The “OMG! It’s Only Wednesday?” Comedy Show is delighted to be working with Club One Entertainment and owner, Marty Fullwood, to bring comedy to the Hills of Western Mass!  She can be seen performing through out New England and the States.

Lineup subject to change without notice. 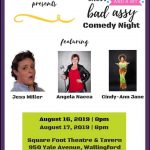 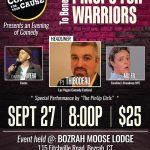